Excursion in the northern part of the country to visit the Limon waterfall, Haitises national park, Cayo Levantado and, in the period between January and March, the arrival of whales. Tour in the north east of the Dominican Republic by bus. Duration of the journey about 2h30. Arrival at Miches where we will take a catamaran up to Santa Barbara de Samana. On a truck, we will reach a ranch where we will ride horses in the direction of the Limon waterfall. You will pass through the rainforest to the waterfall that plunges into a river and have a bath into its fresh waters. Then we will spend a moment in a typical house where you can enjoy cocoa fruit and coffee. After lunch we will catch a catamaran to the small Caribbean island of Cayo Levantado in the middle of the Atlantic Ocean. Relaxation and swimming in the turquoise waters. An unforgettable adventure !! This will be a unique experience for photographing these magnificent marine specimens A real wonder of nature. The bay of Samana, in the northeastern region of the Dominican Republic, becomes in the period between January and March the place with the highest concentration of humpback whales. These whales are among the largest marine mammals: on average, they range from 12 to 15 meters and can weigh up to 60 tonnes. Here we meet the whales during the seduction and mating rituals. It is characterized by songs specific to these playful cetaceans. Competition between men can often look like a singing contest and is accompanied by beautiful vertical jumps with the nose or tail. Their parade is accompanied by great blow of tails and fin: A real duel to win the love of the lady. The spectacle is breathtaking: these large mammals move with surprising agility, defying all the laws of gravity, completely forgetting their fear for the happiness of scientists and tourists who can observe them at distances of few meters. 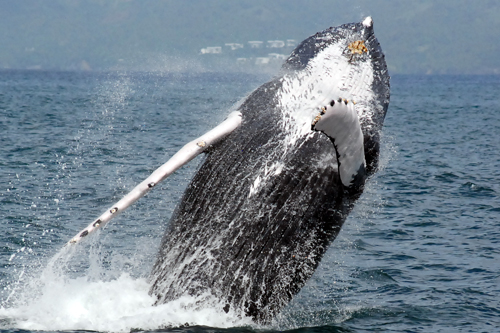 A unique opportunity for whale lovers, but also for those who want to be surprised by the aquatic games of these giants of the seas. We will stay at their contact for about 2h 30 hours to admire the spectacular jumps ... Breakfast and lunch buffet are included, drinks "open bar" for the whole day.